A great article highlighting the importance of play: 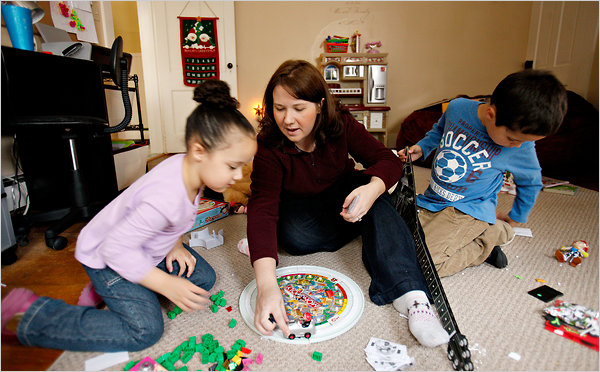 SARAH WILSON was speaking proudly the other day when she declared: “My house is a little messy.”
Enlarge This Image

Megan and Michael Rosker, with their children (from left), Jude Rosker, 2, Eli Gorman, 6, and Coko Rosker, 3, use their sunroom in Redington Shores, Fla., as a playroom.
Ms. Wilson lives in Stroudsburg, Pa., a small town in the Poconos. Many days, her home is strewn with dress-up clothes, art supplies and other artifacts from playtime with her two small children, Benjamin, 6, and Laura, 3. “I let them get it messy because that’s what it’s here for,” she said.
Ms. Wilson has embraced a growing movement to restore the sometimes-untidy business of play to the lives of children. Her interest was piqued when she toured her local elementary school last year, a few months before Benjamin was to enroll in kindergarten. She still remembered her own kindergarten classroom from 1985: it had a sandbox, blocks and toys. But this one had a wall of computers and little desks.
“There’s no imaginative play anymore, no pretend,” Ms. Wilson said with a sigh.
For several years, studies and statistics have been mounting that suggest the culture of play in the United States is vanishing. Children spend far too much time in front of a screen, educators and parents lament — 7 hours 38 minutes a day on average, according to a survey by the Kaiser Family Foundation last year. And only one in five children live within walking distance (a half-mile) of a park or playground, according to a 2010 report by the federal Centers for Disease Control, making them even less inclined to frolic outdoors.
Behind the numbers is adult behavior as well as children’s: Parents furiously tapping on their BlackBerrys in the living room, too stressed by work demands to tolerate noisy games in the background. Weekends consumed by soccer, lacrosse and other sports leagues, all organized and directed by parents. The full slate of lessons (chess, tae kwon do, Chinese, you name it) and homework beginning in the earliest grades. Add to that parental safety concerns that hinder even true believers like Ms. Wilson.
“People are scared to let their kids outside, even where I live,” she said. “If I want my kids to go outside, I have to be with them.”
Kathy Hirsh-Pasek, a developmental psychologist at Temple University in Philadelphia, concluded, “Play is just a natural thing that animals do and humans do, but somehow we’ve driven it out of kids.”
Too little playtime may seem to rank far down on the list of society’s worries, but the scientists, psychologists, educators and others who are part of the play movement say that most of the social and intellectual skills one needs to succeed in life and work are first developed through childhood play. Children learn to control their impulses through games like Simon Says, play advocates believe, and they learn to solve problems, negotiate, think creatively and work as a team when they dig together in a sandbox or build a fort with sofa cushions. (The experts define play as a game or activity initiated and directed by children. So video games don’t count, they say, except perhaps ones that involve creating something, and neither, really, do the many educational toys that do things like sing the A B C’s with the push of a button.)
Much of the movement has focused on the educational value of play, and efforts to restore recess and unstructured playtime to early childhood and elementary school curriculums. But advocates are now starting to reach out to parents, recognizing that for the movement to succeed, parental attitudes must evolve as well — starting with a willingness to tolerate a little more unpredictability in children’s schedules and a little less structure at home. Building that fort, for example, probably involves disassembling the sofa and emptying the linen closet. (A sheet makes an excellent roof.)
“I think more than anything, adults are a little fearful of children’s play,” said Joan Almon, executive director of the Alliance for Childhood, a nonprofit pro-play group. “Some people have a greater tolerance for chaos and have developed a hand for gently bringing it back into order. Others get really nervous about it.” Megan Rosker, a mother of three (ages 6, 3 and 2) in Redington Shores, Fla., has learned to embrace the disorder. She set aside the large sunroom in her home for the children and filled it with blocks, games, crayons, magazines to cut up and draw in, as well as toys and dress-up clothes. “I think a big part of free play is having space to do it in, a space that isn’t ruled over by adults,” she said.

“The other key is not to instruct kids how to play with something,” she said. “I can’t tell you how many board-game pieces have been turned into something else. But I let them do it because I figure their imagination is more valuable than the price of a board game.”
Enlarge This Image

Roberta Golinkoff, Leslie Bushara and Kathy Hirsh-Pasek were organizers.
But, Ms. Rosker added, “I won’t claim any of this has been easy for me or my husband,” noting that her husband used to be “a total neat freak.” She said they have learned to live with disarray and to take other difficult steps, like strict limits on screen time.
Ms. Rosker has also campaigned, although unsuccessfully, to bring recess to her son’s elementary school. But school officials were too worried about potential injuries, unruliness and valuable time lost from academic pursuits to sign on to her idea and, she was surprised to find, many parents were similarly reluctant. “They said: ‘I’m not going to sign that. I’m sure there is a good reason why this is good for our kids — our school has good test scores.’ “
To try to reach more parents, a coalition called Play for Tomorrow this fall staged what amounted to a giant play date in Central Park. The event, known as the Ultimate Block Party, featured games like I Spy, mounds of Play-Doh, sidewalk chalk, building blocks, puzzles and more. The National Science Foundation was closely involved, advising organizers — and emphasizing to parents — the science and the educational value behind each of the carefully chosen activities. Organizers were hoping to attract 10,000 people to the event. They got more than 50,000.
“We were overwhelmed,” said Roberta Golinkoff, a developmental psychologist at theUniversity of Delaware and a founder of the event along with Dr. Hirsh-Pasek. They are now working with other cities — Toronto, Atlanta, Baltimore and Houston, among them — to stage similar events, along with making the Central Park gathering an annual one.
The goal, in some ways, is to return to the old days.
“When I was growing up, there was a culture of childhood that children maintained,” said Jim Hunn, vice president for mass action at KaBOOM, a nonprofit group that is a leading voice in reducing what it terms the “play deficit.” He noted that he learned games like Capture the Flag from other children. To revive that culture, he said: “Parents have to reassert themselves in this process and teach them how to play. It’s critical that parents take some ownership and get out and play with their children.”
But promoting play can be surprisingly challenging to parents. Emily Paster, a mother of two in River Forest, Ill., a Chicago suburb, tries to discourage screen time and encourage her children to play imaginatively. That usually works fine for her 7-year-old daughter, who is happy to play in her room with her dolls for hours. But her 4-year-old son is a different story, especially in the cold weather when he’s cooped up.
“If he wants to play, he always wants me to play with him,” Ms. Paster said. “This child has a million toys. Every kind of train you can imagine. But he really wants a partner. If I’m meant to get anything accomplished — dinner, laundry, a phone call — then it’s really difficult.”
Encouraging brother and sister to play together only goes so far. “It seems like there’s a ticking time bomb,” Ms. Paster said. “Someone’s going to decide they’re done before the other one’s ready.” Sometimes, a video screen is the unwelcome but necessary alternative.
“If I want to get anything done it’s like, ‘Here’s the Leapster,’ “ she admitted, referring to a Leapster Explorer, a video-like device for preschoolers.
But once they’re used to it, Mr. Hunn said, children will direct their play themselves — a situation Ms. Almon recalls from her own childhood. “Our neighborhood gang organized a lot of softball games,” she said. “There was no adult around. We adjusted the rules as we needed them. Once the adults are involved it becomes: Here are the rules, and we have to follow these rules. It still can be a good activity but stops being play.”
In the vast world of organized children’s sports, a few parent-coaches are getting that hands-off message. Ms. Almon knows of a soccer coach who started allowing children to organize their own scrimmages during practice while he stood silently on the sidelines, and a hockey coach in Chicago who ends practices by shooing all the adults off the ice and letting the kids skate as they please.
There are more formal efforts, in addition to the Ultimate Block Party initiatives. The US Play Coalition, a group of doctors, educators and parks and recreation officials, plans a conference next month at Clemson University on the value of outdoor play. KaBOOM has built 1,900 playgrounds across the country, most in low-income neighborhoods, and in September helped organize “Play Days” in 1,600 communities. It also has added do-it-yourself tools on its Web site to help parents organize and create neighborhood play spaces themselves. Another Web site scheduled to start this spring,LearningResourceNetwork.net, aims to create a broad educational source for parents and teachers.
“Our first big push will be on play,” said Susan Magsamen, the executive director of the group.
An important part of the movement is teaching children themselves how to play. The average 3-year-old can pick up an iPhone and expertly scroll through the menu of apps, but how many 7-year-olds can organize a kickball game with the neighborhood kids?
Toward that end, at the Central Park event, parents were given a 75-page “Playbook” outlining research on play and offering children ideas for playful pursuits — things that generations past did without prompting and that may evoke in today’s parents feelings of recognition and nostalgia.
“Climb on the couch with your friends and pretend you are sailing on a ship to a distant land,” reads one idea. Another, from the section on construction play: “Lay a toy on the floor and figure out how to build a bridge going over the toy with blocks.”
“Make paper doll cutouts from old newspapers and magazines,” a third suggests, “and let your imagination fly!”
https://milestonesandmiracles.com/wp-content/uploads/2017/08/milestones-miracles-logo.jpg 0 0 admin https://milestonesandmiracles.com/wp-content/uploads/2017/08/milestones-miracles-logo.jpg admin2011-01-14 12:04:002011-01-14 12:04:00We agree with the New York Times!
0 replies

Want to join the discussion?
Feel free to contribute!

BRING THE SNOW TO YOU! Children learn what they live!
Scroll to top